What happens when you put eight millennials in front of hundreds of restaurant executives? They talk, and they don’t hold back. In fact, the hour-long,  “Ask a Millennial” session at this year’s Fast Casual Executive Summit in Nashville operated like a focus group on steroids with this coveted age group. And in this case, the focus was on the most and least popular brands, restaurant tech and other online offerings.

The group included everyone from a Vanderbilt junior and budding film freelancer, to a pharmaceutical sales rep and young digital marketing manager. Another panelist was the founder of her own online company, while another was the VP of marketing for a Nashville-based event company. Some of their preferences were a bit surprising, like an overall avoidance of restaurant apps and most loyalty programs, as well as what might be described as outright disdain for Yelp reviews for most panelists.

“I personally think Yelp is the bane of humanity.” — Bo Jennings, millennial panelist and VP of marketing, Cumberland Hospitality Group.

But the big winners with these eight included Panera’s app, particularly the rapid pick-up function and UberEats and Lyft, which many played off each other for the best deals of the moments. And speaking of deals, they want them and they want them big. In fact, one panelist said the value of an offer would have to be in the $10 range for him to think about installing a restaurant’s native app on his phone. 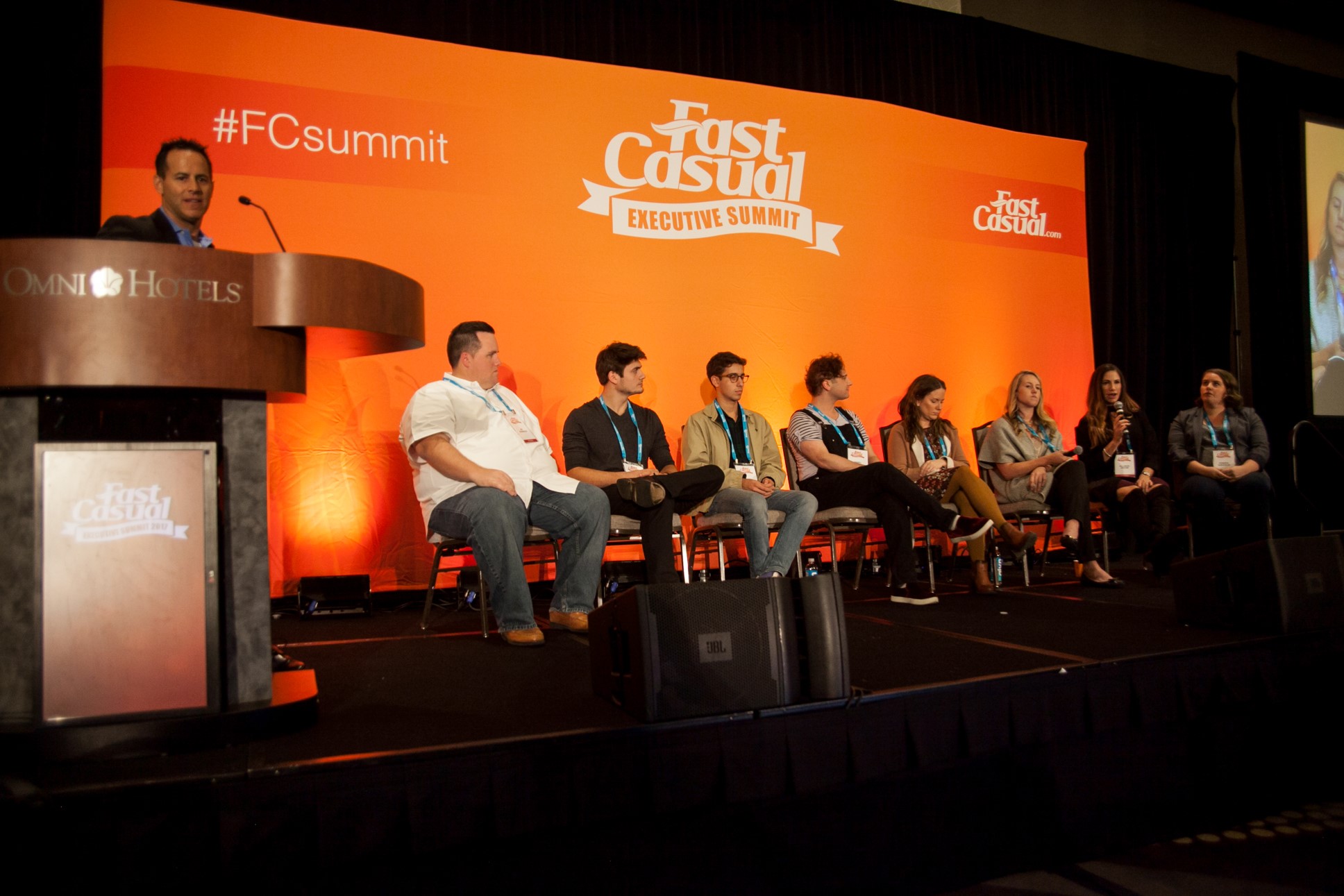 It was, in short, a revealing session that had some executives in the audience actually quoting some of the millennials’ comments in later sessions that day. What follows are some of the most enlightening comments from this hour, which was moderated Oracle Hospitality’s Jeff Grossman. He launched the give-and-take by asking the young adults which fast casuals were their favorite. They included Panera, Chipotle, Chick-Fil-A and Nashville fast casuals —  Caviar and Bananas and Peg Leg Porker.

Maybe Yelp needs to review itself

Yelp was a big loser with most of the panelists, although two young women said they had no real problems with the review site. The other five panelists were at best lukewarm and at worst downright distrustful and nearly angry.

“I personally think Yelp is the bane of humanity,” said the first millennial on the panel to respond, who said he worked with online sites all day for his profession. “I would rather look at Google reviews because they take more time and effort (on the reviewer’s part). ”

As for native restaurant apps, most found those too space-consuming to include on their mobile devices with one particular exception for this panel of eight, who all mentioned Panera and its app as one of their favorites.

“Really my phone is so bogged down with apps that I really like things like UberEats … because it’s all there,” said one panelist.

Another added, “On my phone now for restaurants the only one I have is Panera because of their rapid pick-up option.”

Others on the panel repeated that Rapid Pick-up affection, as well as that for UberEats, while another said she like the Pizza Hut app because of its pizza-building function, while adding that “And if I can get it and not talk to anyone, that’s terrific.”

When Grossman took panelists into a deeper probe of their reasoning for so little overall use of restaurant loyalty programs, it was clear that “app excess” on their mobile devices was a huge barrier to entry.

A young digital marketing manager put it this way, “I start with (a restaurant loyalty program), but then I lose the card or never use the app. … But, Papa Murphy’s text program I like … because I don’t have to interact unless I want to.”

Grossman asked the panel what types of incentives it would take to prompt loyalty program usage for a specific restaurant brand. They were clear. They expect valuable offers, with one panelist saying he would need ongoing offers, but to really use a restaurant’s own app, he’d expect offer values worth $10 or more.

“Millennials expect the red carpet to be rolled out to them,” said one woman. “I also think, reminding you at check-out about how many points you’ve accumulated and whether you want to use them would help.”

“I don’t want to waste my time on native restaurant apps,” another chimed in. “I want to go through easier routes where I can order, get delivery and accrue rewards. … Also, I like texts or methods where you can interact or not depending on what you need.”

The use of EMV or what most of us call the credit card chip was a huge loser with this panel which none said they really understood or even could figure out a reason regarding its existence. But they really spoke up with clear consumer love for tools like Apple Pay.

“I love Apple Pay,” said another. “But the chip – I don’t even understand why the chip took place anyway.”

When asked about kiosks, currently being installed at break-neck speed in many restaurants worldwide, the panel expressed a tepid response but still had an overall appreciation for the machines. They were equally clear, however, that this is only the case when kiosks are intuitive, straightforward and quick to use. Many said often that is not the case in their experience.

“I think there’s probably a market for standardizing kiosks and all their interfaces … so no matter what restaurant I go to it’s the same. … If I have to learn the kiosk then I’m probably not going to the restaurant.”

Another woman added, “I only use these at the airport … and I expect an upgrade, too.”

Why in the world NOT free Wi-Fi

This group clearly thought free Wi-Fi should be a given at any restaurant that wants their business, perhaps explaining some of Panera’s overall popularity with this group since it has long offered this feature.

“There’s one café that I don’t even go to anymore because they time their Wi-Fi .”

In fact, the lack of this feature in restaurants appeared to evoke at best, irritation, but at worst, downright anger.

“I’d say it really depends on what (a restaurant brand) wants,” said a panelist. “Do you want us there for hours, like at Panera, or do you want us in there and then to get us out?”

Another panelist showed just how much this single feature means to millennials and their business.

“Like, there’s one café that I don’t even go to anymore because they time their Wi-Fi. and I really don’t like that.”

“Yep, it’s definitely expected,” said another panelist. “Most of the time we’re all trying to do 40 things at once, so if anything can help me to do two things at once, I like that.”

They give to the givers

Finally, Grossman asked these young adults how many had actually decided to go to a restaurant because of that brand’s community involvement or social responsibility efforts. These seven individuals were clear that this type of activity made an equally clear difference to this age group.

“There’s definitely a lot of appeal in this … like I love to give money to restaurants that are giving money to causes I like.” said a panelist.

Another student panelist added, “I think seeing something like grass-fed beef or organic food definitely affects me and whether I’m going there.”

And finally this nice summation from that previously mentioned digital marketing manager on the panel, who said, “We’re all individuals, but if you give us an opportunity to (support) something, well I’m definitely for all that. … But we don’t like talking to people … unless you get us up on a panel. Then, we’ll talk to you all day.”

Registration is now open for the 2018 Fast Casual Executive Summit in Seattle.

Posted with permission from www.FastCasual.com