Saladworks serves up self-service to spice up CX

Saladworks, a name synonymous with fresh salads, is refreshing its image with an eye on the technology-savvy consumer.

Having played a pioneering role in the fresh salad restaurant business, the 30-year-old franchise organization thinks the time is right for an environment where diners can choose ingredients that meet their personal menu preferences. Self-serve kiosk technology is at the top of the organization’s menu as it engages in a nationwide rebranding with an eye on the technology-savvy consumer.

In the newly remodeled Saladworks restaurants, customers will browse dietary preferences on a touchscreen and use a drop-down menu to order from the newly designed Life Bar kiosk. They will select menu items based on dietary preferences such as low sodium, high protein, gluten-free, vegan/vegetarian, and specific diets like Weight Watchers and Atkins.

“You can pick a lifestyle like low-calorie, high-protein or vegan,” said Jan Talamo, chief creative officer at Think-Traffic, a marketing agency that has been working with Saladworks on its rebranding initiative. “You can pick a known branded diet like Weight Watchers. Or if you have a food allergy…you can click on as many of these as you want to create a pallet for yourself. It will show you your available options in those categories.”

“We want to cast a ‘broad net,’ and that’s what Life Bar does,” Talamo said. “It basically says, ‘here are your options from a nutrition standpoint.'” The kiosk remembers a customer’s preferences, and the customer can change these at their discretion.

Saladworks, with 97 franchise locations in 14 states and two countries, has already remodeled its corporately owned Andorra, Pennsylvania, location to present the first Life Bar kiosk. The grand opening for this beta test restaurant will be in a few weeks.

A need to connect 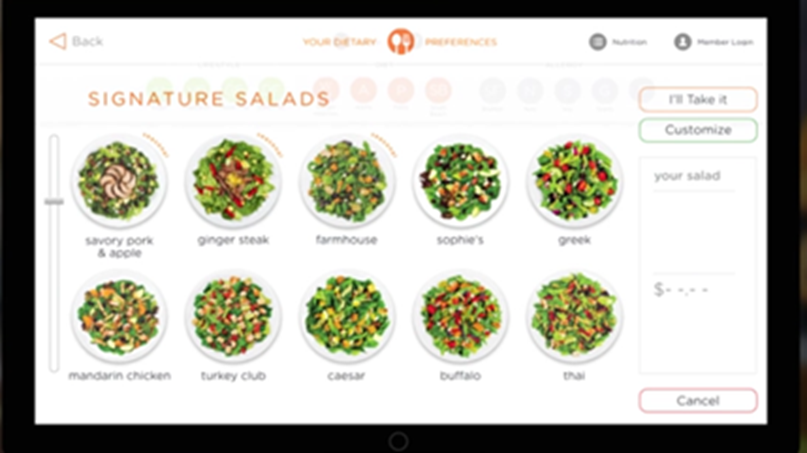 “We needed to connect consumers in a high-tech, high-touch way to interact with our brand and to access our brand,” said Pat Sugrue, Saladworks president and CEO. “Beyond just the ambiance of the restaurant, we needed to rethink the service offering in light of a changing consumer.”

In planning its rebranding, the company spent a lot of time visiting restaurants and other retailers to get a sense of how consumers are behaving in retail environments.

“We needed to get out and see kiosks in multiple channels,” Sugrue said. The Wa Wa convenience store chain has one of the fastest operating kiosks, he said. The Saladworks team also looked at Panera’s 2.0 kiosk, as well as Starbucks. “We got a good handle on just how easy Starbucks made it for people on the go,” he said.

Consumers nowadays want to have access to the Internet during all meal occasions, said C.W. Bruton, vice president of operations.

“While they’re eating they’re reconnecting on social media, catching up on their emails, etc.,” Sugrue said.

The remodeled Saladworks restaurant has Wi-Fi connectivity, USB ports and electric jacks to allow diners to attend to their personal and business lives in addition to the Life Bar.

“For those who are technology savvy who don’t want to sit through a queue, speed is more important than human interaction,” Bruton said. “This is going to help take our customer service to a whole other level.”

Restaurant employees will assist customers in using the kiosk. The traditional service will still be available for those customers who want it. 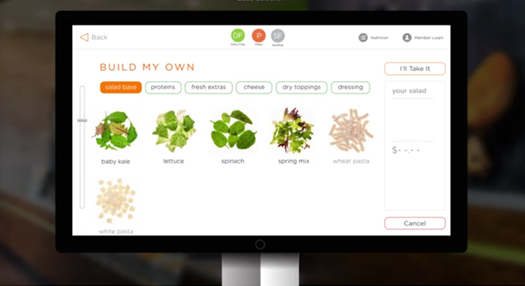 The self-serve kiosk is an important tool for a restaurant like Saladworks that has 60 ingredients that can be configured into a mind-boggling number combinations. “The challenge for us was pretty immense,” Sugrue said. Consumers want to be able to build a salad from these different ingredients with as few clicks as possible.

“When you’ve got all those items you’ve got to make choices on, we felt there was a ‘miss’ in terms of how consumers get the data they need to make the informed choices that they wanted to make,” he said.

“You push the Life Bar button, and it allows you to make those choices.”

The user interface grays out the choices that don’t fit the consumer’s dietary preferences based on an established consumer profile. But the consumer can still order whatever they want. “It’s not up to us to tell you, ‘you can’t have that.’ Even if it’s grayed out, you can still order it,” Sugrue said. “We guide you based on your feedback, but we don’t tell you what you should and shouldn’t have.”

Sugrue believes Life Bar will set a new standard in how kiosks are used to assist consumers.

While the kiosk is critical to the company’s new branding, fresh produce remains the crux of its identity. “That is one thing that has never changed; we continue to set that bar” Sugrue said. “But we are certainly recognizing that technology really allows us to deliver that core element of our brand in a very significant way.”

The company did not wish to reveal the amount it has invested in the new technology but expects to have ROI projections in the next 60 to 90 days, Sugrue said.

“They’re on the precipice of bringing high technology to their consumer loyalists,” Think-Traffic’s Talamo said about Saladworks. “In the Andorra store, they will pilot the first iteration of this kiosk.”

The kiosk is one of several technologies the franchise chain is integrating, along with a new POS system, a loyalty app and food delivery services.

“We had to make an investment in a new POS system and software to support all that,” Sugrue said. “There are a lot of moving parts integrating this in a seamless way for the consumer.”

“The (software) backbone of the kiosk and the in-store point of sale is the same,” Bruton said.

“Gusto had the capabilities, but as importantly, they had the interest in doing something like this at this stage of their growth,” Bruton said. “It required a significant investment on their part, and it was very, very important to us. There isn’t anybody who has a plug-and-play solution.”

Gusto, for its part, similarly holds Saladworks in high regard.

“They’re engaging with their customers in a way that nobody else that I’m aware of really is, where once you identify yourself as a loyalty partner or as a consistent customer, you can build a profile of yourself,” said Don DeMarinis, Gusto chief revenue officer. He said he has seen this concept in hospitals and retirement facilities, but not in consumer foodservice.

“We’re kind of the canvas and they (Think-Traffic) are painting this really beautiful, elegant, customer-facing UI,” said DeMarinis. “We’re providing the (technology) hardware. Our point-of-sale application is the underpinning of that technology.”

“Today, when people talk about technology in the restaurant, it’s about, ‘Do you have a mobile app, do you do online ordering, do you have a loyalty program, can I bring your store up on my cell phone, can I order through my cell phone, can I order through a self-service kiosk?'” DeMarinis said. “None of what I just said has anything to do with point-of-sale anymore, but it has to connect to the point-of-sale to be valuable.”

Gusto is also working with Saladworks in other areas, including the loyalty program, the POS, online ordering and back office management.

“It (fast casual) is a segment of the restaurant business that doesn’t have a lot of complexity, so it enables us to focus on doing a core set of things very well,” he said.

Technology companies that focus on POS for all types of restaurants have a hard time mastering the different segments, he added. “We want to enable our customers to utilize and leverage all of those tools,” DeMarinis said.

The Saladworks team also believes the Internet and social media are playing a bigger role in consumer dining decisions. Hence, the company is working on a way to allow customers using social media to do “social ordering,” Sugrue said.

Thirty years ago, Saladworks introduced a new concept in fresh salad dining. Today, the company is using technology to make its offerings more relevant to customers.